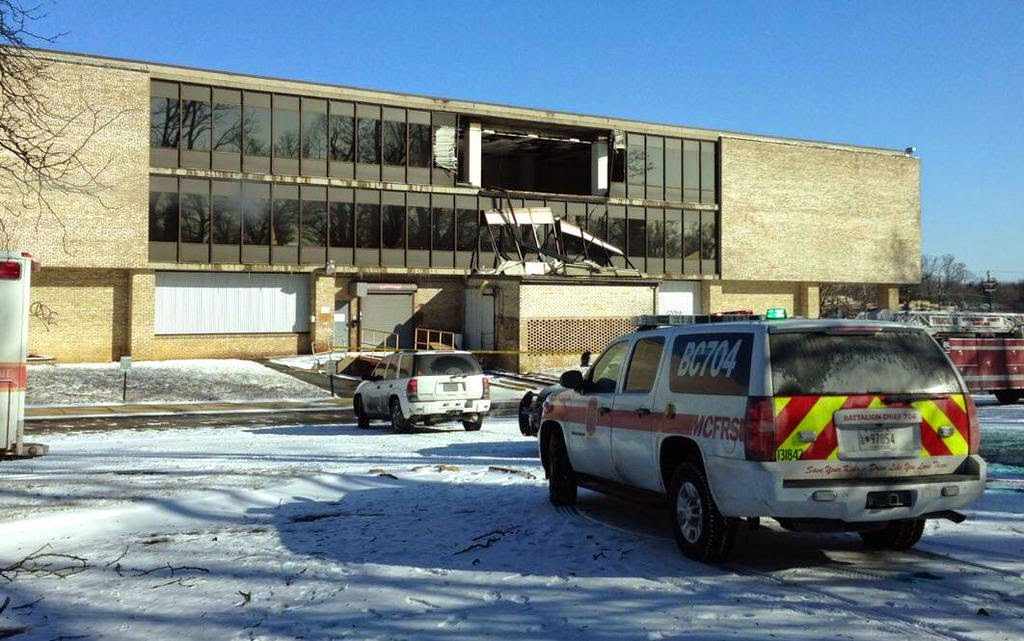 Yesterday's wind gusts up to 60 MPH were more than the venerable BAE/Vitro building could take. Winds blew out windows, but there were no injuries, Montgomery County Fire and Rescue spokesperson Pete Piringer said. The building has been vacant since June 2010.

While the site layout now is very appropriate for its suburban location, near single-family homes, developers are rubbing their hands together in eagerness of urbanizing suburban Aspen Hill. Walmart was intentionally used by the County Council (not the landowner) as a poison pill to achieve what they really wanted - mixed-use, urban, transit-oriented redevelopment of Aspen Hill.

Their nightmarish urban vision is laid out in this illustration from the Aspen Hill Minor Master Plan Amendment report, where you can see their ultimate scheme - replacing suburban retail with a small city of high-rise luxury apartments. This will be facilitated, of course, by the Bus Rapid Transit being worked up for Georgia Avenue. BRT hit a snag recently when the public was informed by the State Highway Administration that the line would require demolition of 155+ homes and businesses along Georgia Avenue. That "oops" moment for developers, and the "smart growth" organizations that front for them, resulted in a temporary pause in planning for the Olney-Wheaton route.

One later phase no one is talking about publicly? When developers plan to snap up and demolish the relatively cheap homes around the commercial area, and extend the new urban zone into the residential neighborhoods as far as they can go. Maybe even all the way to Veirs Mill, where they will meet with the planned town center on today's Halpine View site. And then, maybe even to Rockville Pike, if a similar land grab is pulled off in the historic Twinbrook neighborhood.

Top photo via Pete Piringer
Posted by Robert Dyer at 8:00 AM No comments: