The suspect's vehicle is described as a late 1990s/early 2000s Toyota Corolla of unknown color. Damage should be to the right front corner of the vehicle, and involves the headlight assembly.

If you witnessed the collision, or have any information about the this vehicle (location, repairs made, etc.) please call police at 301-279-8000.

Posted by Robert Dyer at 3:17 PM No comments:

Plaza del Mercado is a classic shopping center in the Bel Pre area of Silver Spring. Having lost its Giant grocery store, it could use a new tenant.

One resident has started a petition that has garnered tremendous  support from the community, and now from the second-highest elected official in Montgomery County - County Council President Nancy Navarro.

The petition is asking Trader Joe's to open a store at Plaza del Mercado.

As of this morning, the petition has over 1600 signatures. Navarro has contacted the center's landlord, Federal Realty, to add some political support to the quest.

I commend Council President Navarro for this effort, and I wish other councilmembers would start taking this approach. This is exactly how we should handle "redevelopment" issues in our already-developed areas: asking what citizens want in their neighborhoods, rather than massive, top-down, developer-friendly sector plans such as in Wheaton and Glenmont.

Any redevelopment in our county should benefit those who live here now, rather than some theoretical rich people who we think will move here in the future. And in this case, Trader Joe's would give residents a neighborhood amenity they want, and attract more shoppers who will patronize other businesses while they are there.

And in doing that, no residents are being evicted from affordable housing, nor is any small business going to be run out of business.

Contrast this sensible, winning approach with Wheaton, where the just-approved plan carves up the downtown on a silver platter for developers.  The vast number of affordable housing units at the northern end of town are now all rezoned attractively for development.  Where exactly will the residents of those buildings go when they are demolished to make way for wealthy, "hip" newcomers?

In contrast to claims that Wheaton is a "long-term" plan, we've already heard that the Ambassador apartments (formerly Best Western) are going to be "redeveloped." Predictably, we've heard little about where current residents will live when this happens.  What we have been told, is that the new building will be mixed-income. Which makes it mathematically impossible for all current residents to return.  Expect more of the same in the rest of Wheaton.

Meanwhile, the loss of convenient Triangle parking, along with the little-spoken-of sector plan provision that allows a new road to punch through one of the current Wheaton Triangle shopping centers, would seal the sad fate of small business owners there if fully implemented.

All of the taxpayer money going to developers in these plans would be better spent helping landlords maintain and refurbish existing commercial centers and apartments.

I don't believe Irene's should be replaced by Chipotle.

But I suspect most would agree that Trader Joe's replacing a vacant anchor space would only help the community.

Posted by Robert Dyer at 5:37 AM No comments:

Several sexual assaults, 2 stolen cars and a theft at the Thayer Avenue Safeway are among crimes reported across Silver Spring between February 21-24.

Posted by Robert Dyer at 9:00 AM No comments:

Marlyn Eres Ali, 53, of the 3800 block of Elby Street was struck by an unidentified vehicle while crossing Connecticut Avenue at Everton Street around 8:00 PM. She died later at Suburban Hospital.

Investigators are asking the public for any information regarding the driver who fled the scene, and the make and model of the vehicle. Police believe the car has front-end damage.

The victim was struck in the southbound lanes of Connecticut Avenue.

If you can help police with this case, please call detectives at 240.773.6620.  You do not have to identify yourself to share information.

Now I've tried all three Flavor Finalists in the Lay's Do Us a Flavor contest, and I'm declaring a winner!

But first, I have to review #3, Lay's Cheesy Garlic Bread potato chips.

The Twilight Saga: Breaking Dawn Part 2 will be released on Blu-ray and DVD this Saturday, March 2.  Which store has the best Twilight package? And which stores are opening at midnight?

No bonus material or collectibles.

Target seems to offer the best packages, and midnight opening parties at the following stores in the region: Alexandria, Woodbridge, Bel Air, Ellicott City, Columbia and Annapolis. (If you're reading this and live in another state, click on the link in the first paragraph above to find the store closest to you).

Take note: early birds can pick up a voucher starting at 8:00 AM, Friday, March 1. Then bring your voucher back to the store at midnight to get your Twilight package.

What Target has is a $22.99 DVD/$26.99 Blu-ray Limited Edition version of Breaking Dawn Part 2, with 50 minutes of exclusive video content, including "black carpet" footage, and "hours of additional bonus content."

A $14.99 Target-exclusive Limited Edition of Breaking Dawn Part 1, in a 2-DVD gift set that includes an actual prop flower from the film's wedding scene (see photo below) The prop includes a Certificate of Authenticity to verify it was actually in the movie.

Walmart has an exclusive Breaking Dawn Part 1 & 2 two-movie package, that includes the extended version of Part 1.

Walmart's other exclusive is a free set of 5 mini-posters (see photos below) that you receive with purchase of Breaking Dawn Part 2. But hurry - while supplies last.

Walmart stores opening at midnight in our region are Nottingham and Hampstead, both of which are in Maryland.

If you're an obsessed fan, you'll have to hit Best Buy for the locket key chain and 5-movie collection, Target for the Part 1 movie prop and 50 minutes of bonus video, and Walmart for the mini posters. 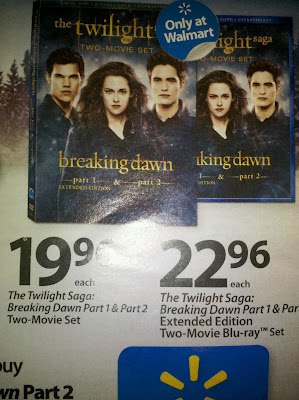 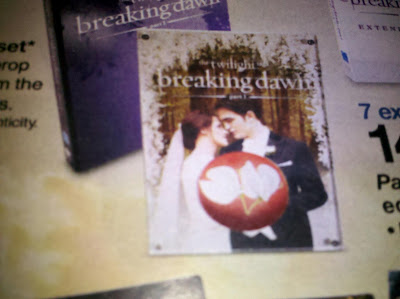 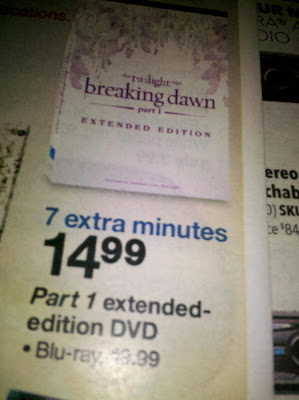 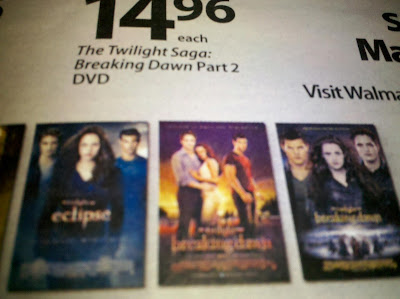 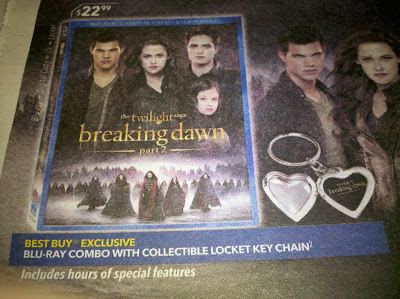 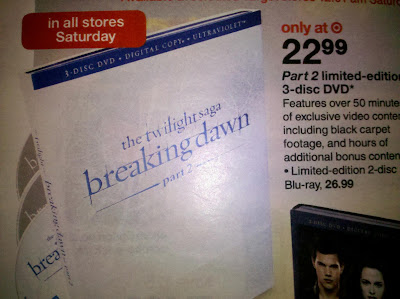 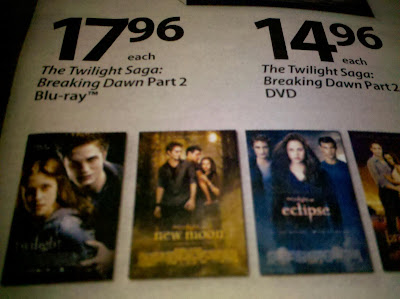 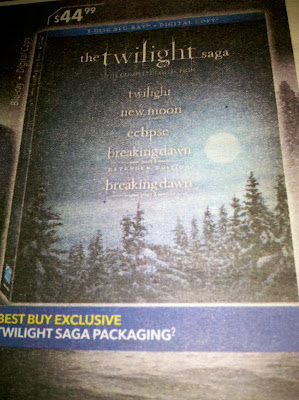 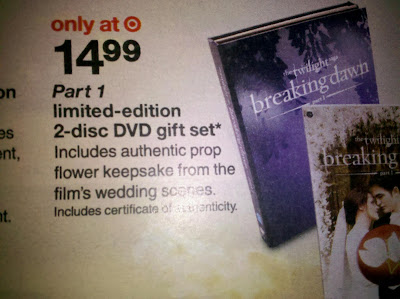 Local salad chain Sweetgreen will open a new location in downtown Silver Spring this year.  The shop will be located at 8517 Georgia Avenue, in the former Living Ruff space.

Stop by the Limerick Pub in my old stomping grounds of downtown Wheaton tonight.

Steve Morris and Fergus Kennedy are appearing live at the pub tonight at 8:00 PM, for an evening of Irish music.

They've also got a couple of great entrees this weekend:

Leg of Lamb Sandwich is a hand carved leg of lamb in rosemary au jus, placed on a toasted Kaiser roll. With your choice of potato, it is $14.50.

Their Seafood Platter features lightly-fried, fresh beer-battered cod, and panko-breaded jumbo shrimp, oysters and jumbo lump crab balls. With your choice of potato and veggie or salad, it's a deal at $17.50.

Limerick Pub is highly-rated on Yelp and Trip Advisor, and is located at 11301 Elkin Street in downtown Wheaton.

But the deal is also subject to an undisclosed "Life Estate Benefit" for the property's owner, Dr. Leonard Deitz.  That transaction was arranged at a closed meeting of the county Planning Board not open to the public.

The 5.5 acre estate is being acquired with county bonds, under the Legacy Open Space program.