Last night, I bought a Boneless Chicken meal, and here's my review.

The meal included 2 pieces of Boneless Chicken (I prefer dark meat), your choice of 1 side dish (I chose my favorite, mashed potatoes with gravy), 1 biscuit, and a medium drink (Mountain Dew Baja Blast).

I wanted to do a test of the chicken's flavor, juiciness, and meat portion in contrast to the bone-in original.

How does Boneless stack up?

Watch my review for the answers. 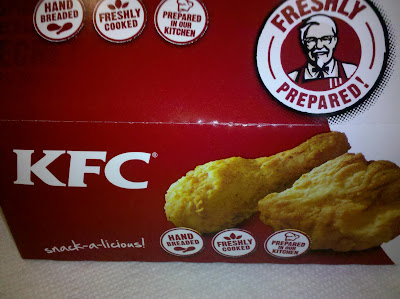 Posted by Robert Dyer at 5:45 AM No comments:

According to Montgomery County Fire and Rescue Public Information Officer Scott Graham, 2 children have been reported to be in a 4-foot storm drain in the 3500 block of Bel Pre Road in Silver Spring.

Firefighters are on scene, and attempting to confirm the report, and find the juveniles, Graham said.

Posted by Robert Dyer at 7:16 PM No comments:

MoCo PLANNER: BRT WILL TAKE 13-21% OF ITS RIDERSHIP FROM METRO RED LINE

Why is this important?

For two reasons. First, it highlights the duplication of existing subway service by BRT. In fact, Commissioner David Hill questioned Cole on that very point at last night's briefing at Rockville City Hall.

Secondly, it confirms my argument from the beginning of this sham of a process regarding BRT:  the duplicative service will attract mostly those who already use transit. In the process, it will slash the already insufficient revenue of the Metro system.

Where will that shortfall be recovered from? From you and I, the taxpayers. And again from you and I, in the form of future Metro fare increases.

It begs the question again - if the county has a magic $5 billion in extra revenue to pay for the BRT system, wouldn't that money be better spent on projects that will actually reduce congestion? These would include M-83 Midcounty Highway Extended, the Rockville Freeway, a new Potomac River bridge, expanded MARC service, the Purple Line and an extension of Metro to Gaithersburg and Germantown.

In contrast to those projects, the ridership, density and demand numbers for BRT simply don't add up.  With no solid evidence that drivers will "get out of their cars," it's safe to assume Metro ridership will be the target audience for the Emperor's New Bus, thereby providing no congestion relief.

What could ultimately end up happening, is a small BRT ridership, taken in even greater numbers from Metro than Cole's projections suggest, riding $5 billion buses along a now even-more-congested Route 355. And Metro in even worse financial straits than ever.

Commissioner Jack Leiderman asked Cole if he was attempting to "punish" drivers by removing 2 car lanes from 355 for BRT. Cole arrogantly responded that drivers "don't own" those lanes.

Mr. Cole, those of us who live in Maryland not only own those lanes, but we paid for their construction, and continue to pay for their maintenance.

Cole made the mistake of comparing the seizure of 2 lanes for BRT to HOV Lanes on I-270. Anyone who actually drives on 270 knows that the HOV idea was a complete failure, and does continue only as a punishment for drivers. The HOV lane is that one which you turn to the left and see hardly anybody in, while you're crawling or at a complete stop on 270. Not only is traffic still jammed, but you're moving even slower, thanks to the loss of 25% of capacity in the Express lanes.  And during rush hour, many HOV drivers are using the lane illegally.

When a skeptical Commissioner Dion Trahan quizzed Cole as to how losing already-jammed lanes would reduce gridlock, Cole referred to Ballston in Arlington.

Cole repeated a popular urban myth among "smart" growth advocates, that traffic on Wilson Boulevard in Ballston and Clarendon has actually decreased, despite massive, dense redevelopment.

This is an apples to oranges comparison, and complete bunk. First, the "less traffic" argument is hardly accurate as it relates to Arlington.

But, more importantly, there is no comparison whatsoever between Wilson Boulevard and 355.

The daily traffic count on Wilson is around 15,000 vehicles.

Wilson is a lower-capacity road than 355.

And Wilson is not an arterial road of the scope of 355.  355 carries heavy traffic from Washington, Frederick, Carroll and Montgomery counties along a corridor that has only one alternative, 270.

In contrast, drivers traveling west-east into Washington through Arlington have many parallel routes to choose from.  Rockville Pike is not Wilson Boulevard, and you can't make it so just to satisfy ideology or developers.

Speaking of which, Cole seems to favor both. Cole's recent suggestion to kill the grade-separated Montrose Parkway certainly revealed an anti-highway, pro-developer bias. That's not a good starting point for a planning department that is supposed to ensure adequate mobility of citizens via a multimodal transportation system.

Asked by the commission's chair, Jerry Callistein, why no planning has been done for BRT parking, environmental studies, BRT-Metro transfers, BRT vehicle storage, etc., Cole essentially responded that the dog ate his homework. It's hard enough to get the BRT plan passed without worrying about those little details, Cole suggested.

Posted by Robert Dyer at 8:59 AM No comments:

Here's something new to try for dinner tonight: Wendy's new Asiago Ranch Grilled Chicken Flatbread sandwich. I stopped by Wendy's last night to try it out myself.

Here's my review, including a zoomed-in closeup of all the fillings in the sandwich: lettuce, salad greens, bacon, tomatoes, grilled chicken breast, Asiago cheese and ranch dressing.

Don't forget the artisan bread, which is one of the strong points in Wendy's attempt to challenge upscale competitors like Panera Bread.

Posted by Robert Dyer at 7:59 AM No comments:

The annual event is organized and sponsored by the Royal Thai Embassy's offices of Commercial and Agricultural Affairs, in Washington, D.C.

Participating restaurants in Silver Spring and Wheaton are: 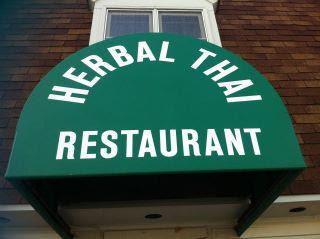 Posted by Robert Dyer at 8:11 AM No comments:

Fifty employees of the Montgomery County Housing Opportunities Commission staged a protest at yesterday's HOC Commission meeting. According to the DC AFL-CIO, the workers were protesting the layoffs of 10 HOC employees.

Carlos Mellott, field representative for UFCW Local 1994, said the "inspectors are key to completing the work of the HOC. They inspect properties to ensure that they're adequately maintained and safe for residents. They have developed strong relationships with landlords and residents in the area. Not only is this a loss for HOC, it's an erosion of the quality of housing and services provided to Montgomery County's low income families."

Reportedly, the jobs are being subcontracted to the private sector. The county is facing a large budget deficit, but recently created several new executive-level positions with 6-figure salaries.

I thought this news was particularly timely, given tenant complaints regarding Charter House in Silver Spring at a recent County Council town hall meeting. 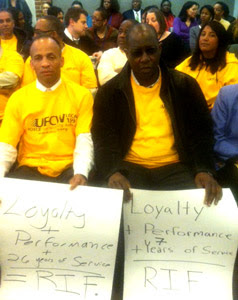 Posted by Robert Dyer at 9:10 AM No comments:

Just in time for the weekend, I have a video review of the newest DiGiorno frozen pizza product at Giant, DiGiorno Pizza Dipping Strips.

This is basically a DiGiorno pepperoni pizza sliced into 4 breadstick-size strips. You get a small, plastic pocket of marinara sauce to dip the strips in. All of this you can heat up in the microwave.

The serving size per person is 2 strips, but that portion is unlikely to satisfy a grown adult. Yet eating all 4 strips is a tremendous amount of salt and fat.  So, you will definitely want to pick up a somewhat healthier side item to have with these, if you are trying to reduce your salt and fat intake. 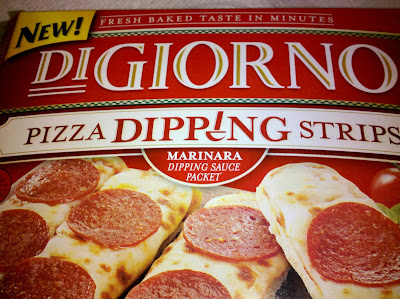 Posted by Robert Dyer at 7:16 AM No comments:

The new Ruffles Max Beer Battered Onion Rings potato chip promises "maximum flavor." Can a chip deliver the flavors of one of America's favorite side dishes? Watch my review and find out! I found these chips at Giant.

Posted by Robert Dyer at 9:13 AM No comments: