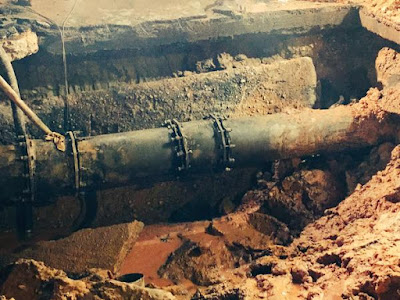 The WSSC completed repair of the water main under Georgia Avenue around 1:00 AM this morning, but commuters will have a rough trip down Georgia anyway. Southbound Georgia Avenue will remain closed for the morning commute between Randolph Road and Arcola Avenue. The break occurred yesterday at Georgia and Weisman Road near Glenmont in Wheaton.

Southbound and northbound traffic will share the northbound lanes of Georgia along that stretch, meaning about 33% less capacity for southbound traffic. This will be a good example of what traffic would be like if Montgomery County were to implement its proposed Bus Rapid Transit plan, which would seize one lane from each side of Georgia for BRT lanes. Multiplied by all of the impacts north and south of this segment, of course.

The water main break flooded nearby homes, and cut water service to residents as well as to the Wheaton Park Shopping Center on Wednesday. A 68-year-old 16" underground main was responsible for the failure, according to the WSSC. The utility estimates that 2.5 million gallons of water were lost during the break yesterday.

Water was restored around 11:25 PM last night to customers affected by the break, according to WSSC.
Photos courtesy WSSC
Posted by Robert Dyer at 5:00 AM