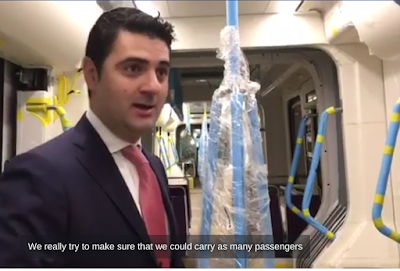 A video released by the state of Maryland to increase excitement about the future Purple Line light rail Tuesday appears to have had the opposite effect. It shows for the first time the interiors of the actual trainsets that will travel the route between Bethesda and New Carrollton. In the video, the interior of the cars appears narrow and cramped.

Massive bulkheads between seating sections create individual cells within each car, increasing the claustrophobic effect. The cars are clearly narrower than subway or commuter rail cars, and even appear more cramped than other light rail and streetcar vehicles in use across the country and the world. Perhaps it was the type of camera lens used, but the PR impact was not a positive one.

Was shrinking the size of the cars one of the cost-cutting measures employed by the state and its partners? These cars do not resemble the ones shown in previous promotional materials.

Tuesday's backfire was reminiscent of another bait-and-switch PR stunt pulled by Montgomery County elected officials. After showing futuristic Bus Rapid Transit vehicles that looked more like subways for years, the County displayed an actual BRT vehicle at the County Fair that instead looked like existing diesel Metrobuses.

The County continues to use the deceptive BRT images in promotional materials to this day - and no wonder, after fairgoers were shocked to find the $10 billion BRT would look nothing like what County officials had promised.

Maybe they can wrap the Purple Line trains in Chicken of the Sea advertisements to bring in some extra revenue, to justify the tuna-can-cramped ride on what they've promised will be crowded trains.
Posted by Robert Dyer at 10:39 AM