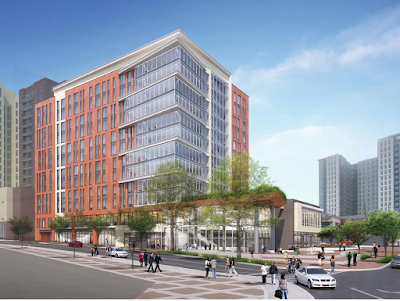 New renderings are giving a better sense of what the heart of downtown Wheaton may look like after a public-private redevelopment of its Metro core. Ahead of the Montgomery County Planning Board's latest review of the project this Thursday, July 30, planners are emphasizing the connectivity elements of the design, as well as the uses for public areas that will include a 35,000 SF Town Square.
Directly adjacent to the Wheaton Metro station, the project will include a StonebridgeCarras-developed 12-story public office building with ground floor retail, a 397-space underground public parking garage, and the Town Square.

Other elements of the project include improvements to adjacent land plots owned by WMATA, a separate Bozzuto-developed residential building, and a County-owned driveway along the north end of the Lot 13 property. The buildings and garage will replace Lot 13, which currently serves businesses in the Wheaton Triangle. Also to be demolished to make way for the Town Square, is the MidCounty Regional Services Center. 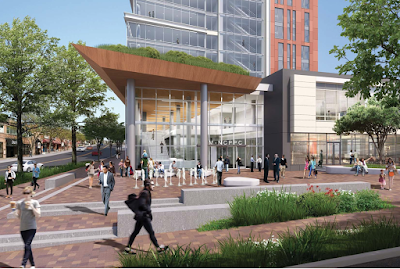 Joining the RSC in the new public office building will be the building's owner, the Maryland National Capital Park and Planning Commission, the County Department of Permitting Services, the Department of the Environment, DEP's Solid Waste Division, and the RSC's Urban District office. 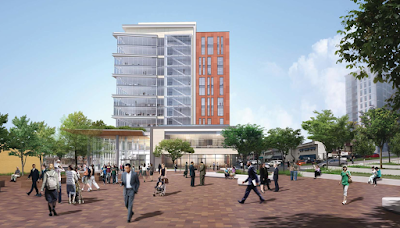 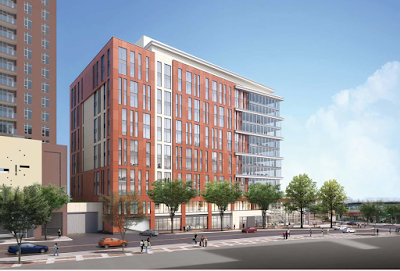 To connect the new project with Georgia Avenue and the Wheaton Metro station, a pedestrian entrance to the garage will be placed directly across from the stairs that descend from Georgia down to today's Lot 13. And an armature, which planners describe as a distinctive design element, will connect the project and Town Square to the Metro station. Also, the section of Reedie Drive that will run between the Town Square and public office building is proposed to be raised to their elevation so that it can be closed as part of the Square for events. 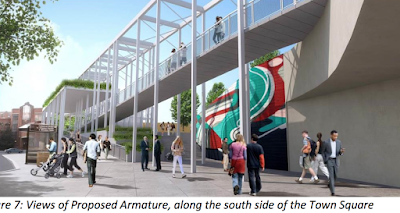 Public art, and where exactly it should be placed, has yet to be determined. A few spots are suggested in a Parks Department letter attached to the report. The public art budget for the project, however, has been set. It is $250,000.

The report doesn't say much about the impact of the lost parking may affect Wheaton Triangle businesses. 397 spaces is a significant increase from the number available today in Lot 13, but depending how many public employees in the new building drive, it's unclear just how many spaces will be left for shoppers and diners, or the crowds the renderings suggest will be attending the many public events in the Town Square (the residential building will have its own garage). 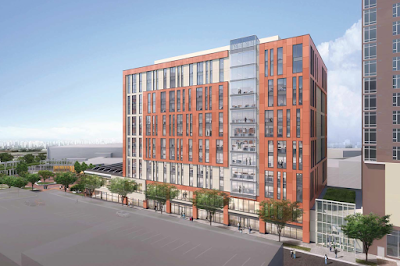 The planning department report acknowledges the project represents a significant change in character from the low-rise commercial buildings that currently dominate the Wheaton Central Business District. Renderings further dramatize the shift toward higher-density. When the project is completed, the high-rise Exchange across Georgia Avenue may seem less the "odd building out" in Wheaton.

Planning staff are recommending transmission of their comments to the Montgomery County Department of Transportation (I assume this is because they own and operate Lot 13) by the board.
Posted by Robert Dyer at 8:00 AM