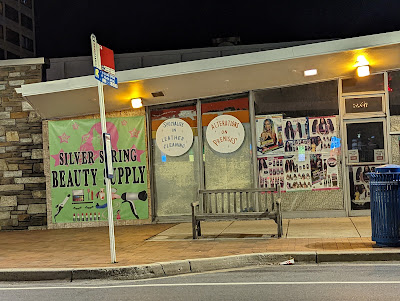 A tenant has been found for the former Weller's Dry Cleaners building at 8237 Fenton Street in downtown Silver Spring. Silver Spring Beauty Supply has moved into the historic building, which is representative of the Googie style of architecture. Weller's ceased operations earlier this year; Charles Weller passed away at 101 years of age in 2016. Weller served his country in World War II, then his community as a businessman for six decades. 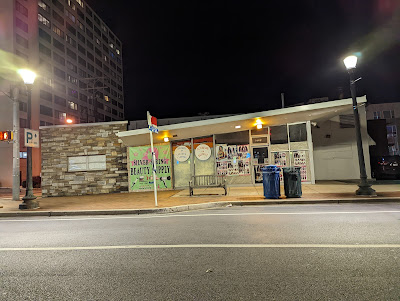 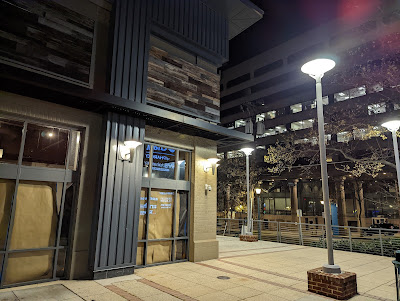 Peet's Coffee has closed at 1316 East-West Highway at The Blairs Shops in downtown Silver Spring. This is not a surprise if you are a regular reader, as I broke the news back in September that this location had been leased by Starbucks, which will construct a new store here. A farewell message has been left in the window directing Peet's customers to their Virginia and D.C. locations. Good luck with that! 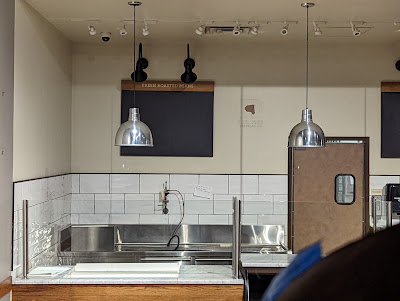 Nearby residents are far more likely to make the transition to a convenient Starbucks right here during the morning rush hour. The only real suspense will be whether or not the future Starbucks employees here decide to unionize or not. 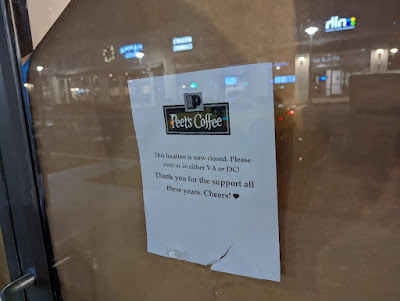 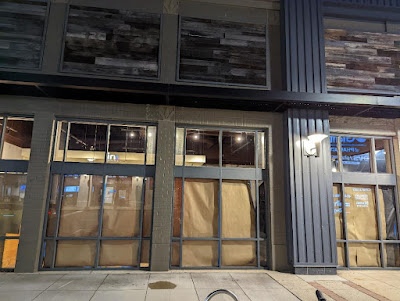 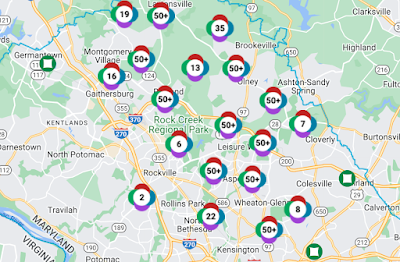 UPDATE - 12:48 AM, November 28: Both occupants of the plane have been successfully rescued, and are on the ground, Montgomery County Assistant Chief Administrative Officer Earl Stoddard said. They are being transported to local hospitals with serious injuries, Fire Chief Goldstein announced, a change from earlier announcements that there were no injuries.
UPDATE - 12:25 AM, November 28: Pepco reports tremendous progress in power restoration, with only 1,297 customers remaining without power at this moment. Utility workers are using a bucket truck to ground the Pepco tower and transmission lines so that the rescue effort can finally get underway sometime this morning.
UPDATE - 11:50 PM: Pepco claims to have restored power to over 60% of customers affected by the power outage over the last hour. It reports there are now 34,688 customers still without electricity.
UPDATE - 11:30 PM: Montgomery County Public Schools will be closed Monday, November 28, 2022, due to the power outage. MCPS offices will also be closed Monday.
UPDATE - 10:01 PM: Maryland State police have identified the pilot of the plane as Patrick Merkle, 65, of Washington, D.C., and the passenger as Jan Williams, 66, of Louisiana. Both are still on-board awaiting rescue, and are reportedly not injured.  Their aircraft is a Mooney Mike 20P single engine plane. Pepco reports more customers are without power than ever tonight, with 113,081 now in the dark at this hour. Montgomery County Public Schools says it will make an announcement about potential school closures later tonight.
UPDATE - 9:05 PM: Montgomery County Fire Chief Scott Goldstein reports that Pepco crews have to manually climb up to ensure the tower is grounded. The plane must then be secured to the tower. A large crane from Digging and Rigging in Clarksburg has been brought in. Additional personnel resources are due to arrive on-scene at 9:30 PM. "One of our concerns is the safety of the occupants in the airplane, the safety of our fire and rescue personnel," Goldstein said. Goldstein confirmed there are two occupants in the plane. "I have no information, I'm not here to talk about power outages," he said.
UPDATE - 8:34 PM: Occupants of the plane that crashed into the Pepco tower have not yet been rescued. The number of Pepco customers without power in Montgomery County has dropped from 80,922 to 75,672.
UPDATE - 6:03 PM: Montgomery County Fire and Rescue Services spokesperson Pete Piringer reports that the power outage has been caused by a plane crash in the Montgomery Village/Gaithersburg area. The plane is stuck in a Pepco tower and power lines, Piringer said. Passengers on board are so far reported to be uninjured.
Pepco customers across Montgomery County are in the dark, after what appears to be a massive system failure. 78,944 customers are currently without power, according to the utility's outage map. In fact, over 20,000 more customers lost power just since I began typing this article. There is no violent weather in the area.

Virtually all of the outages are in the central and eastern part of the county, but residents in several areas of Bethesda report that their lights flashed multiple times, power fluctuations that can damage appliances and devices. Few of the outages are west of I-270, in Rockville and Germantown. Some of the biggest outages are in Derwood, Aspen Hill, Olney and Wheaton. There are currently a couple of smaller outages in Bethesda - one in the Woodmont Triangle area, and another near the D.C.-Maryland border.

The outage follows a Thanksgiving on which power outages also occurred across the D.C. area. Stay tuned for further updates on the cause of the power outages.

Alyssa's Mangonadas to open in Wheaton 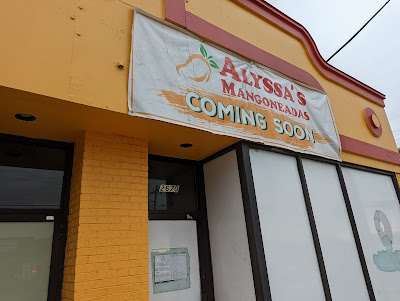 The revolving door of tenants in the old Wheaton Tile Center building at 2670 University Boulevard W. is turning again. Recent years have seen Doña Bessy Pupuseria, and then Casa de Dios y Puerta del Cielo (God's House and Heaven's Door) Church come and go. Now Alyssa's Mangonadas is moving in. It's surprising that there has been such turnover at such a high-visibilty, prime spot on a major highway. 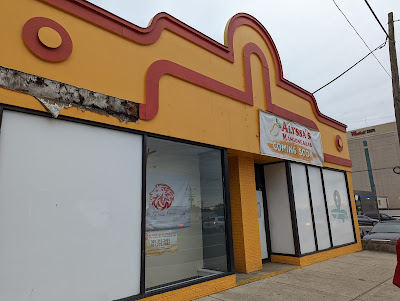 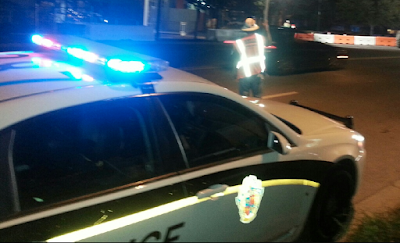 Montgomery County police responded to a report of an armed carjacking in downtown Silver Spring Monday night. The carjacking was reported in the 900 block of Thayer Avenue at 8:51 PM.
Posted by Robert Dyer at 8:35 AM No comments:

Tires were slashed on a vehicle in the 7600 block of Maple Avenue in Takoma Park on November 20. Takoma Park police were called to investigate the next day. Police say the vandalism occurred sometime between 2:30 AM and 3:20 PM on Sunday. Anyone who has any information about this incident is asked to call police at 301-270-1100, and refer to case number 220051510.
Posted by Robert Dyer at 5:08 PM No comments: 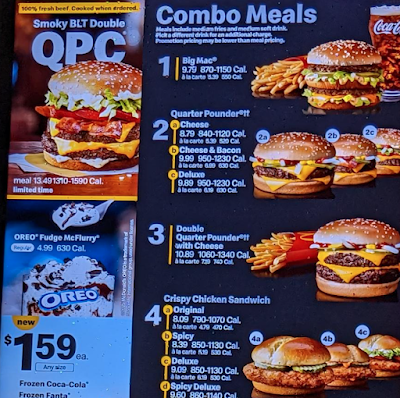 When fast food restaurants try out new menu items, their test markets are usually places like Ohio and Southern California, not Montgomery County, Maryland. Last year, McDonald's tested a Smoky BLT Quarter Pounder with two slices of American cheese, Roma tomatoes, Applewood smoked bacon, shredded lettuce and "smoky sauce" at several of their restaurants here in the county, including Bethesda (River Road), Rockville and Silver Spring. The burger was apparently well-received, as it has now been added to their menu nationwide for a limited time this month. Joining it is an Oreo Fudge McFlurry.

I'm only aware of one other time that a fast food chain has tested a possible menu item in Montgomery County, In the mid 1990s, McDonald's tested Mighty Wings. That iteration apparently wasn't ready for prime time, as a meatier and spicier version of Mighty Wings didn't get the green light for nationwide release until two decades later in 2013. Let's hope there will be more test items from McDonald's in the future, and that other fast food chains will recognize our usefulness as a test market.