UPDATE ON STABBING AT FOREST PARK APARTMENTS IN SILVER SPRING 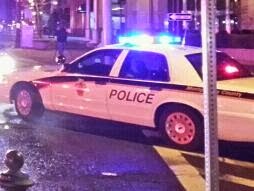 The violent robbery attempt Monday, that left a woman in serious condition with multiple stab wounds, took place at the Forest Park Apartments in the 9300 block of Piney Branch Road in Silver Spring. Montgomery County Police say the victim was walking near the apartment complex, when she asked for money by the suspected robber. When she declined to comply, he threw her to the ground and stabbed her with a knife.

The suspect, still at large, is described as a Hispanic male of medium height, wearing a scarf over his face, and wearing a dark shirt.