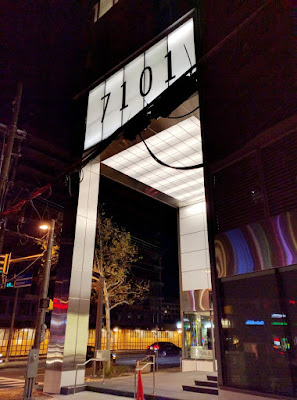 No major corporation has relocated its headquarters to Montgomery County in nearly twenty years. Thanks to the County's moribund private sector economy, office property owners have had to scale back their expectations, and try to lure smaller tenants. Whole-floor suites built with corporate headquarters in mind get hacked up into smaller office units, as firms like Intelsat and Northrop consider MoCo, and then pick Virginia instead.

So, while they didn't break the County Council's humiliating two-decade streak of no Fortune 500-size firms moving here, Brandywine Realty Trust had to be delighted when The Donohoe Companies - a major regional player in real estate development and construction - leased two floors at its newly-renovated 7101 Wisconsin Avenue office building.

But it almost didn't happen.

"Had we known then what we do now," Donohoe President and COO Chris Bruch told the Montgomery County Council at a public hearing Tuesday, the company might have chosen another jurisdiction. Was it the typical reasons that companies who choose Virginia or the District have cited, like the lack of direct access to Dulles Airport? The severe traffic congestion? Montgomery County's notoriously business-unfriendly climate and record high taxes?

The high visibility of the office building at 7101 Wisconsin Avenue, along with $600,000 in incentives and loans from MoCo and Maryland, helped seal the deal for Donohoe. As the largest tenant in the building, Donohoe expected to be able to install signage on its facades, which loom over a major commuter route.

Instead, Bruch recounted, the company was "quite surprised" to learn that their signage plan would not meet the outdated restrictions of Montgomery County's sign ordinance. While that "may not seem like a big deal," Bruch said, "It is." Large tenant signs are currently restricted to a facade where a customer entrance is located.

Jennifer Russel of the Greater Bethesda Chamber of Commerce testified that the current sign rules are "detrimental to the economic vitality of Chamber members." She said the importance of anchor office tenant signage was stressed recently by an official with the Maryland Department of Commerce. Major tenant name visibility is a barometer for visitors of "how thriving the economic center is" in an area like Bethesda, she said.

Brandywine Realty Trust's Deb Santano said that the zoning text amendment (that would allow Donohoe's signage) currently before the Council would help "foster a positive economic development climate in the County." With office property owners having to scale back expectations to smaller tenants, she said, the inability to allow additional tenant signage is "out of step with today's market."

It was telling that the only opposition testimony to the ZTA was from two members of the County's Sign Review Board; both stressed they were only speaking for themselves, not the board.

If you drive down Massachusetts Avenue into the District, you will eventually pass by the headquarters of one of Donohoe's competitors, Douglas Development. You can't miss it, because the building features gigantic, lit signage for the company visible from every direction. Montgomery County companies need the same advantage.

One more thing I hadn't even thought of to add to the list of reasons why, as of this writing, MoCo hasn't scored a single major corporate headquarters in two decades. And one more thing that needs to change.
Posted by Robert Dyer at 8:13 AM