Montgomery County Police have released more details about the September 15 rape of a teenage girl in Sandy Spring, including a suspect description. That alleged rapist remains at large.

Detectives say they are withholding the exact age of the teen who was raped, to protect her identity. They now report the victim was actually in the 17800 block of Auburn Village Drive when the assault occurred. As she walked to an unidentified school between 7:00 and 8:00 AM, police say she was accosted and directed to a nearby grassy area, where she was raped by the suspect.

That suspect is now described as a non-white male, possibly Hispanic, 5’05” to 5’07” tall, with an average build and black hair. He was wearing a black t-shirt and unknown color jeans. It will be interesting to find out if this crime is gang and/or illegal immigrant-related in nature. Gangs like MS-13 that are gaining strength and numbers in Montgomery County often require members to assault, rape or kill as initiation rites.

Anyone with information about this sexual assault is asked to call the Special Victims Investigations Division at 240-773-5400 or Crime Solvers of Montgomery County toll-free at 1-866-411-TIPS (8477). Crime Solvers will pay a cash reward of up to $10,000 for information provided to their line that leads to an arrest in this case. Residents are reminded to immediately call 911 if they observe suspicious activity. 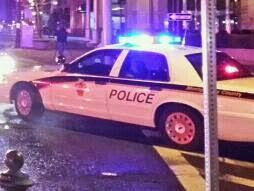