Demolition of The Ambassador to begin this month in Wheaton 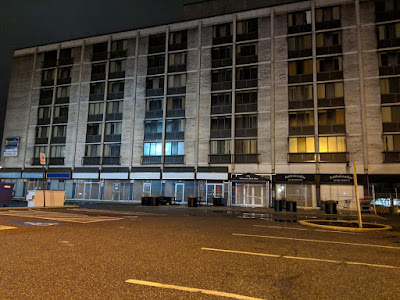 Two long-stalled Wheaton development projects have become one big project, which is being branded as "Wheaton Gateway." Montgomery County's Housing Opportunities Commission had delayed an earlier plan to redevelop the site of The Ambassador apartments (formerly a Best Western hotel) at 2715 University Boulevard West for several years. Lindsay Ford, located adjacent to The Ambassador site on Veirs Mill Road had indicated about two years ago that it was seeking to relocate, freeing up its even-larger property for redevelopment. Now the two sites are being assembled for one project by developers Ralph J. Duffie, Willco and the HOC.

To clear the way, demolition of the vacant Ambassador will begin this month, according to the development team. Interior demolition will begin first. Next month, the building's exterior will start to come down.

The news indicates the ice-cold Wheaton development market may at least be reaching a tepid temperature. However, this is one of only two projects to be proposed since the Council passed the Wheaton sector plan earlier this decade, and both have required a government entity partner, in this case the HOC (the Lot 13 project is being built by Montgomery County itself as a government office building).  But no private developer has proposed a truly-new project despite acres upon acres of available land.

It's certainly positive that a larger lot is being assembled here, which should allow for a much-more successful project scale. I'm sorry to see the venerable hotel go, but its curtain call allowed it to perform a final public service, by exposing that the County's affordable housing "crisis" may have been overstated. It turns out that the HOC not only didn't need the 162 apartments in the Ambassador, but had so many vacant units in its other properties, that it was able to relocate the entire population of the Ambassador to other sites very quickly.

Combined with the affordable Halpine View declaring it has many vacant units for which there is - according to the owners - no demand, this should give pause to the County Council's radical plan to destroy existing single-family home neighborhoods by allowing multifamily development within them. Turns out, at this former Best Western, there really was "room at the inn."
Posted by Robert Dyer at 9:45 AM