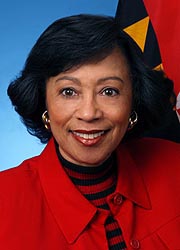 T. Eloise Foster, Montgomery County Executive Ike Leggett's nominee to the Washington Suburban Sanitary Commission, was sentenced for driving while impaired in Howard County in 2007. She was sentenced to unsupervised probation, alcohol counseling, 10 hours of community service, and fined $200, according to The Baltimore Sun.

Foster was pulled over by a Maryland state trooper on Interstate 95 in Howard in June 2007. She failed several sobriety tests, and was charged. Foster was budget director for the state of Maryland at the time.

Leggett, who was a victim of a drunk driver himself in a 2009 crash, called for tightening drunk driving laws in December 2015. The County Council is scheduled to interview Foster Tuesday at 11:00 AM. They are then scheduled to confirm her appointment 55 minutes later.

"The Montgomery County Council joins our Police Chief in calling for the State of Maryland to strengthen our laws against drunk and impaired driving," Council President Nancy Floreen wrote to the Montgomery County delegation to the Maryland General Assembly in February of this year.

Drivers with interesting driving records seem to be joining WSSC often these days. The Washington Post reported that the agency's latest chief was involved in five accidents while driving WSSC vehicles. She totaled one of those WSSC vehicles in a rollover accident on the Capital Beltway, the Post reported.
Posted by Robert Dyer at 8:00 AM