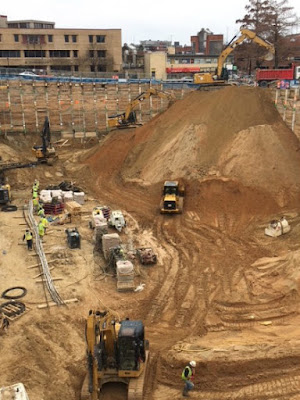 Demolition of the vacant Midcounty Services Center has been delayed again. Now the plan is to raze the building in late December and early January. One reason is that contractors found asbestos in the building, which had to be addressed before demolition can begin.

Excavation has reached bottom at the south end of the future site of a new Montgomery County office building at Lot 13. They are now about ten feet from the bottom on the north end.
Posted by Robert Dyer at 12:12 PM