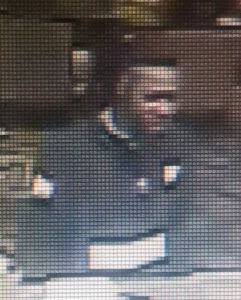 Montgomery County police are investigating the latest incident of gunfire in the County, as violent crime continues to surge. Detectives have released a surveillance photo of the man they allege fired multiple rounds into the passenger window of a black sedan parked at the 7-Eleven located at 12257 Tech Road just past White Oak on March 29.

When officers arrived on-scene, they found no sedan, but just the broken glass left behind by the alleged shooting. It appears the suspect was attempting to enter the locked vehicle, and used the gun to break the glass. Detectives report that the suspect had sought a coat hanger from a nearby hotel, telling hotel staff that he had locked himself out of his car.

Anyone with information about this discharge of a firearm or the suspect is asked to call the 3rd District Patrol Investigations Unit at 240-773-6800. Those who wish to remain anonymous may call Crime Solvers of Montgomery County toll-free at 1-866-411-TIPS (8477). Crime Solvers will pay a cash reward of up to $10,000 for information provided to them that leads to an arrest in this crime. Tipsters may remain anonymous.
Posted by Robert Dyer at 10:49 AM