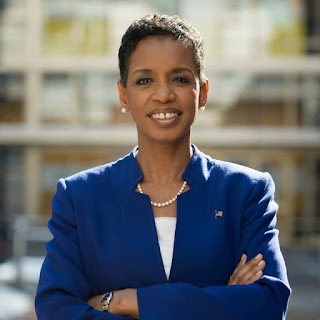 Maryland Congresswoman Donna Edwards has moved ahead of Rep. Chris Van Hollen in the Democratic race for exiting U.S. Senator Barbara Mikulski's seat, according to a new poll. The poll, commissioned by the Edwards campaign, shows her currently beating Van Hollen by 42%-37% among Maryland registered Democrats.

Garrick Delzell, Edwards' campaign manager, attributed her surge to voters believing she better represents their everyday economic concerns than Van Hollen. Voters identify with Edwards as a single mom, Delzell said in an email, who "knows what it’s like to juggle bills, insurance, and a career."

Van Hollen has so far drawn a huge advantage from many wealthy establishment supporters, and a massive campaign chest funded partly by Wall Street interests. The Montgomery County congressman has led the race all year in polls and in fundraising.

Edwards' lack of establishment support has put many county and state Democratic officials in a odd position, one that could come back to haunt them in the future.

Most of Montgomery County's political machine is squarely behind Van Hollen, despite Edwards' potential to be the first African-American to be elected to the Senate from Maryland. Former Rockville Mayor and Montgomery County Executive Doug Duncan is one of the few prominent former or current officials here to endorse her campaign.

In a statement after the poll results were released Tuesday, Edwards said, "Marylanders want someone who will fight for progressive values and the issues that matter to working families. These results show that Maryland primary voters believe I will be that voice."
Posted by Robert Dyer at 8:00 AM