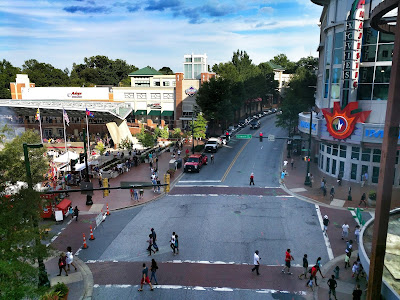 Regal Cinemas has responded to the latest movie theater shootings with a new bag check policy at its theaters nationwide. The cineplex giant operates the Regal Cinemas Majestic Stadium 20 theater in downtown Silver Spring. Its new policy reads as follows:

Security issues have become a daily part of our lives in America. Regal Entertainment Group wants our customers and staff to feel comfortable and safe when visiting or working in our theatres. To ensure the safety of our guests and employees, backpacks and bags of any kind are subject to inspection prior to admission. We acknowledge that this procedure can cause some inconvenience and that it is not without flaws, but hope these are minor in comparison to increased safety.

The security check policy applies to bags, backpacks and packages, including purses.

Regal's corporate Facebook page is blowing up with customer backlash against the new policy, with many patrons feeling their 2nd and 4th Amendment rights are being violated. A few posters thanked the chain for ensuring their theaters would be gun-free zones. 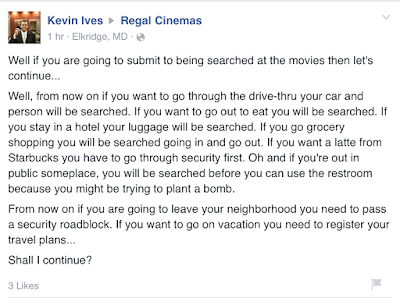 However, Regal's policy does not explicitly state which legal or illegal items would not be allowed to be brought into the theater. Nor does it specifically refer to firearms, even though it would seem obvious that weapons and explosives would be the primary intent of the policy.

Such a policy would not have prevented the infamous Aurora, Colorado theater mass shooting in 2012. In that incident, the shooter left the theater through the emergency exit. He then retrieved weapons, explosives and other materials from his car, and re-entered through that exit, which he had propped open enough to prevent it from locking.

That case made clear the security issues caused by a lack of ushers regularly patrolling theaters, as they once did not that many years ago. Had an usher simply ensured that door was closed on a routine walkthrough, and thereby locked to outside intruders, the shooter would have been foiled.
Posted by Robert Dyer at 8:00 AM