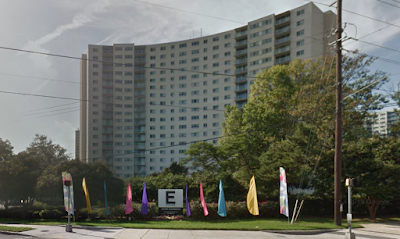 Montgomery County police successfully reunited a lost toddler with his parents this past weekend in White Oak. The boy, who police estimated to be two or three years old, was found wandering by himself on the 18th floor of the landmark Enclave apartment tower in White Oak on Sunday morning.

Officers responded to the scene after Enclave security personnel alerted them to the lost child. Police took the boy to the 3rd District Montgomery County police station, and alerted the public to the search for his parents, as the child could not verbally tell officers who his parents were. Four-and-a-half hours later, police were successfully able to reunite the family.
Posted by Robert Dyer at 8:38 AM