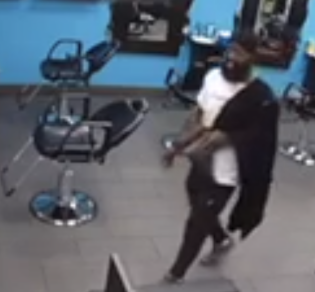 Montgomery County police are searching for a man who allegedly assaulted three female employees inside Brow Art 23 on Tuesday, October 1 at Wheaton Plaza. Detectives say the man entered the salon around 1:00 PM, and struck up a conversation with two female employees at the counter. He then allegedly physically forced the women into a back room, where a third female employee was working.

After struggling with the suspect, the three women were eventually able to flee from the store and call police. The suspect then fled Wheaton Plaza. Detectives have just released surveillance video of the suspect in the hope that the public can help identify and locate him.
Police describe the alleged assailant as an African American male around 6' tall, with a medium build, dark skin, and a full beard and mustache.  The suspect was wearing a black baseball cap with a white skull printed on it, a black jacket over a white shirt, black jogging pants, and gray shoes.  For unknown reasons, the suspect was also carrying a pair of brown shoes at the time of the assault.

Anyone with information regarding this suspect is asked to call the 4th District Investigative Section 240-773-5530. Those who wish to remain anonymous may call Crime Solvers of Montgomery County toll-free at 1-866-411-TIPS (8477). Crime Solvers will pay a cash reward of up to $10,000 for information that leads to an arrest in this case.
Posted by Robert Dyer at 8:46 AM