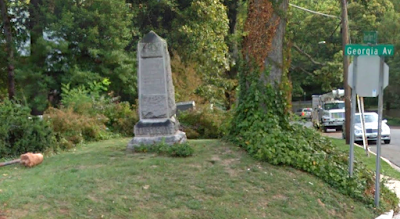 The Confederate statue located on the grounds of the Red Brick Courthouse in Rockville has been a dominant story in Montgomery County news over the last year. But it's not the only tribute to fallen Confederate soldiers in the County.

A monument on the grounds of Grace Episcopal Church in the Montgomery Hills area of Silver Spring marks the final resting place of seventeen Confederate soldiers who were killed in the Battle of Fort Stevens.

According to the history on the church's website, it is believed that Confederate Gen. Jubal Early himself paid the church $100 to have his men buried in the cemetery there. Coincidentally, Early is said to have earlier taken note of the church's need for a roof as he passed by on the way to that very battle, and contributed $100 to its construction.

Early's own funeral was held in an Episcopal church in Lynchburg, Virginia following his death on March 2, 1894.

While the fallen soldiers were buried at Grace Church in 1864, the monument that marks their resting place was erected in 1896. Fascinating story right here in Silver Spring, and another reminder of the complicated history both Montgomery County and the state of Maryland had during the War Between the States.
Posted by Robert Dyer at 8:00 AM